Useful patterns for the River Don by Sandy Nelson: The following fly patterns were suggested by a variety of River Don fishermen and represent a general selection that covers the whole season, along with a few local specials to help things along.

Most of the flies will work best when fished upstream to moving fish, however there are a few prospecting flies in here too. Remember the fish can be anywhere on the river, so try most spots as they can all hold surprises. 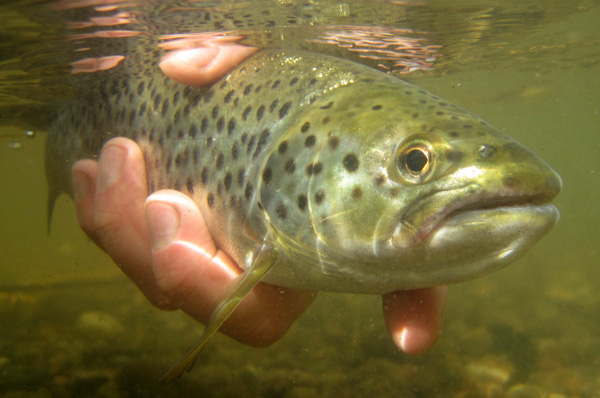 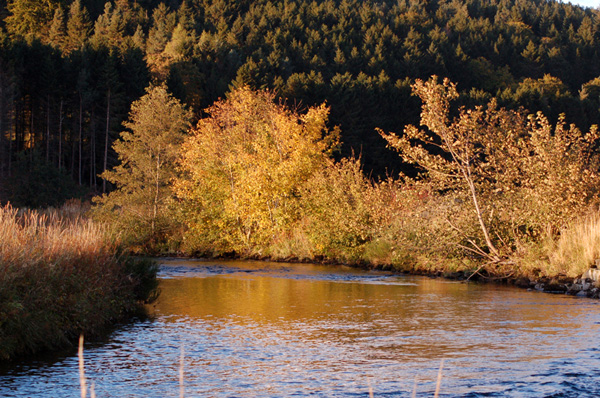 An excellent all rounder for most of the season. 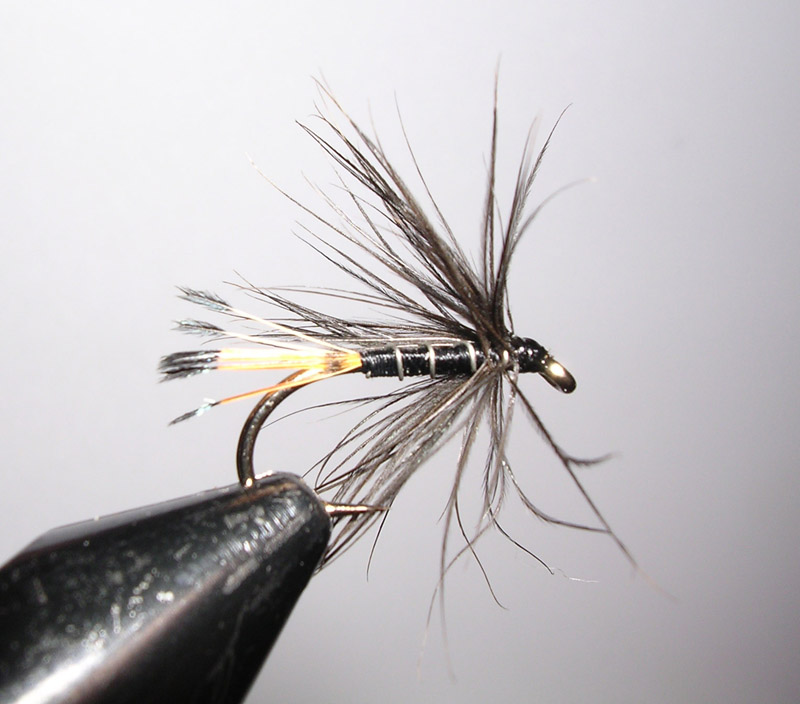 An excellent attractor fly and a good imitation of the minnow, of which the Don trout are particularly fond. 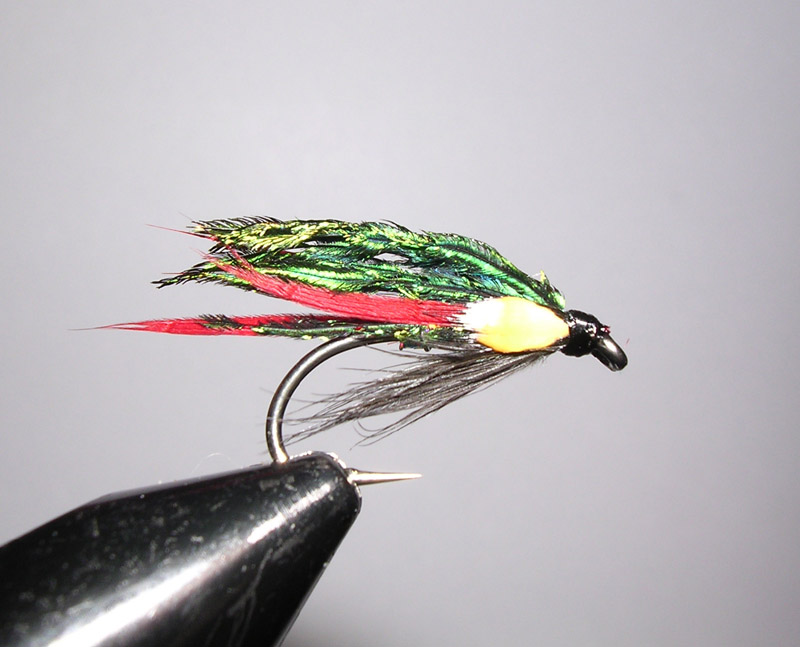 A great sedge imitation for those summer evenings. 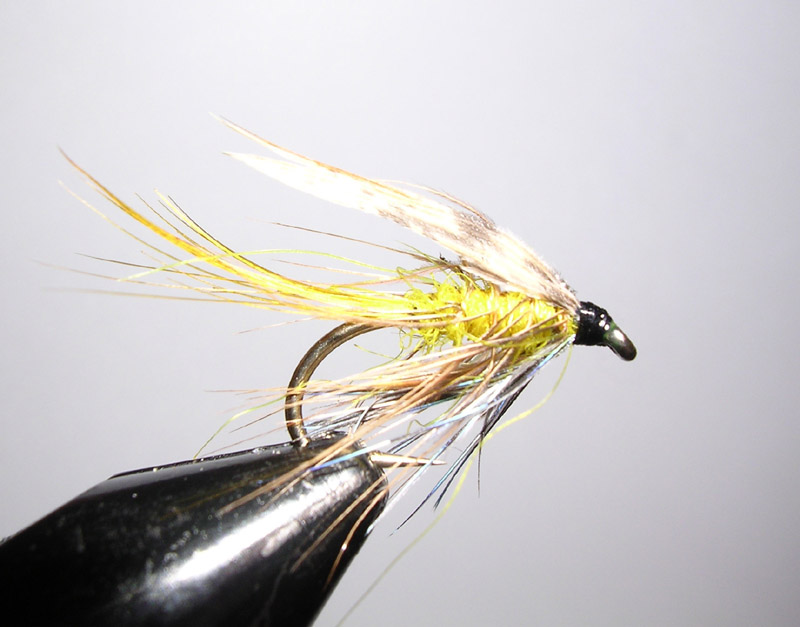 Another super little attractor fly that in the larger sizes imitates the minnows and small fry found in the river. It may also be taken for a hatching midge with a shuck. 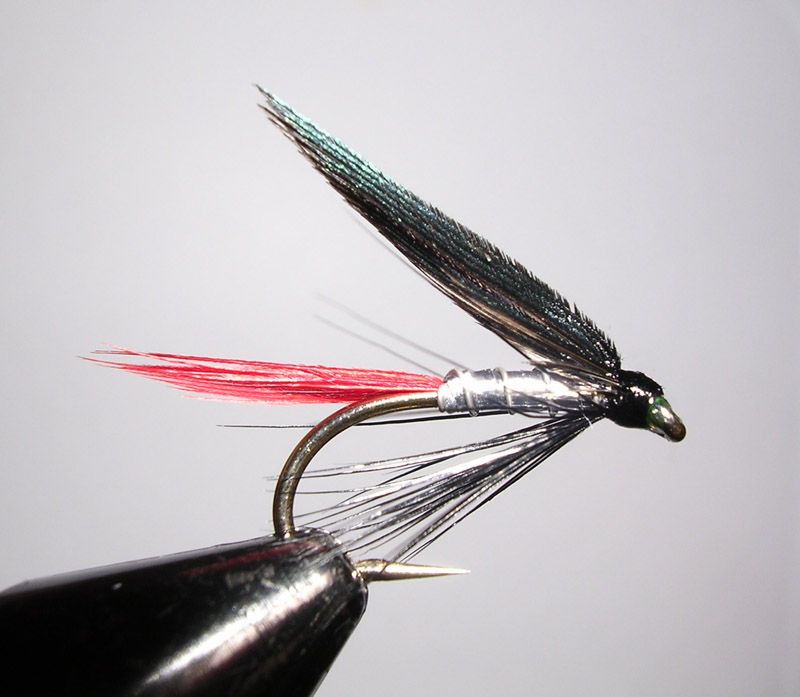 This a good attractor pattern and is very effective during the summer evenings as a hatching sedge imitation. It is also very good with a pearl body. 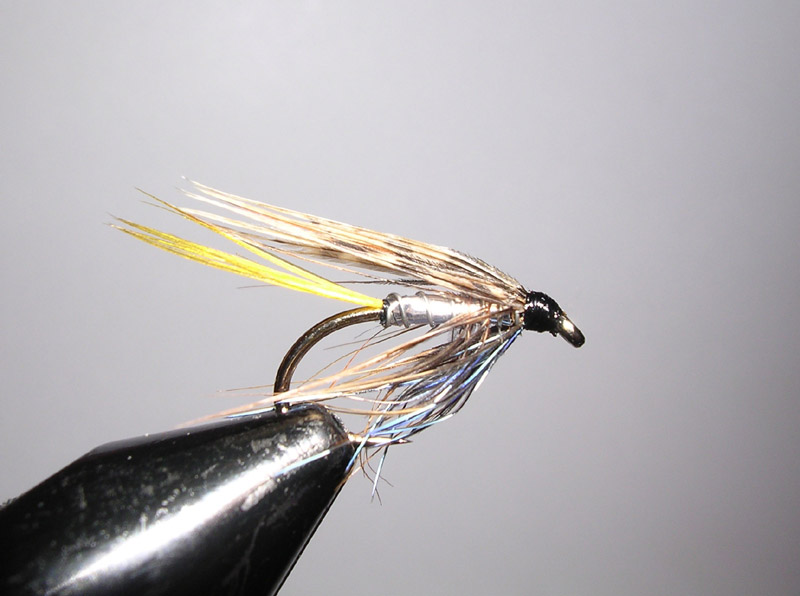 This is another superb all rounder on the Don. There is a hatch of the naturals during early April, when this fly is extremely effective in larger sizes. Silver and Gold bodied versions are good too. 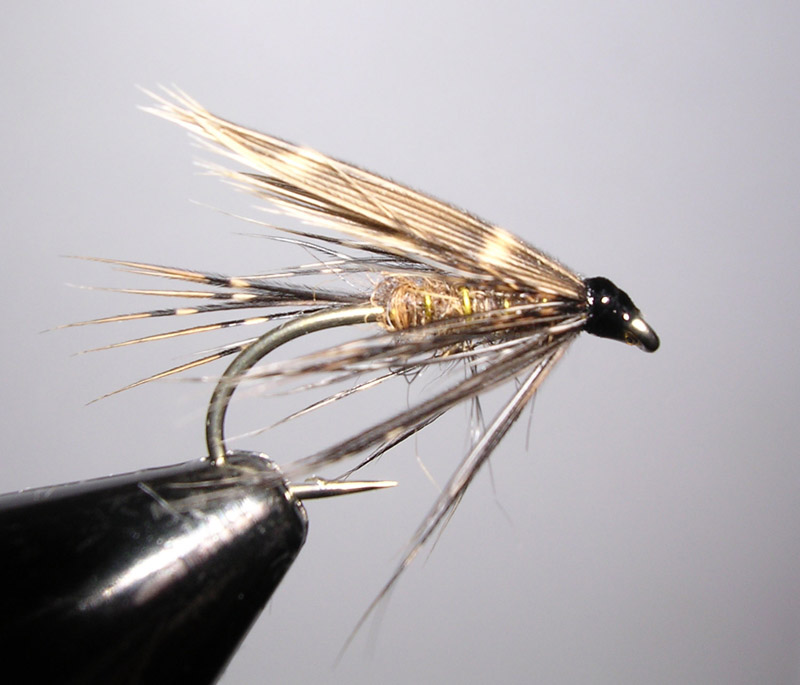 This a very versatile and effective dry fly in a variety of sizes. Tied with the original muskrat fur body or hare's ear (as shown) it covers most of the olives on the river and the March browns too. Traditional style dries are good but the parachute version is far superior.

Hackle: A grizzle and red game cock hackle wound together 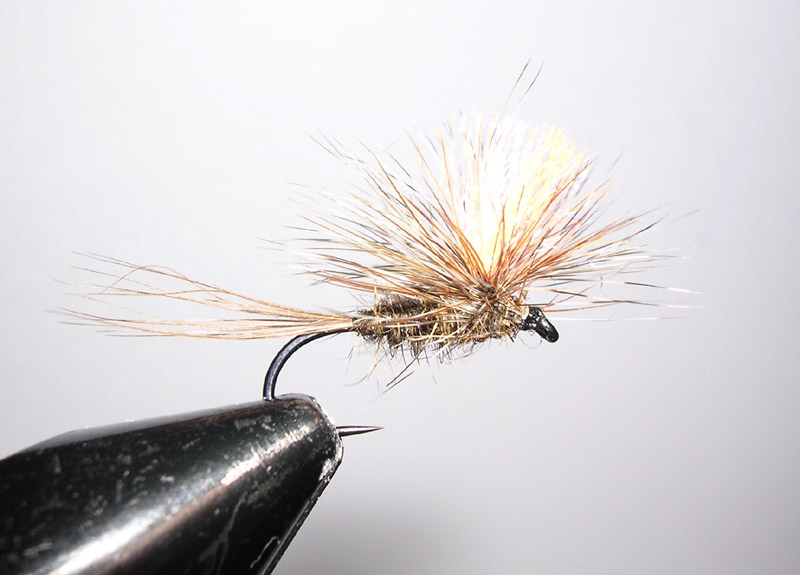 This is a Don special to imitate the Yellow may dun that the Don trout have a particular fondness for. Use it on a June evening when the fly is hatching and some great dry fly sport can be had. 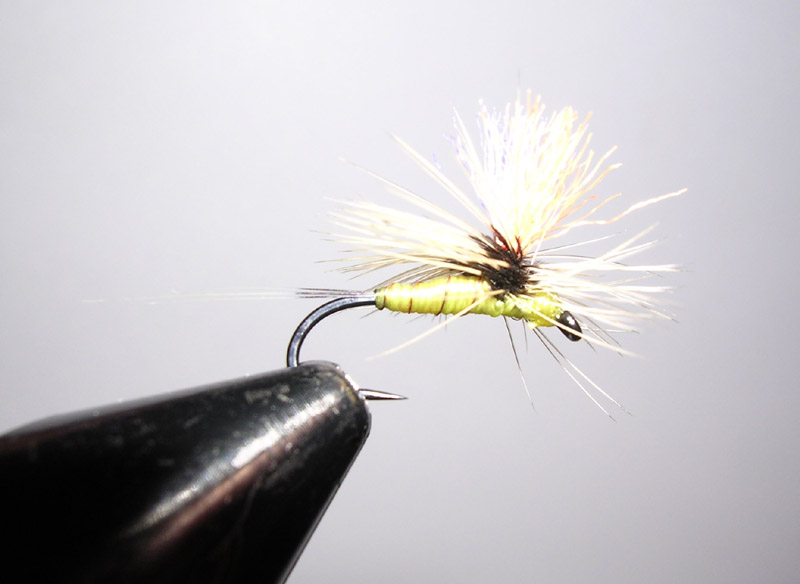 This a great imitation of the Small dark and Blue winged olives which hatch off the river it is also a great Iron blue imitation when tied with red thread. 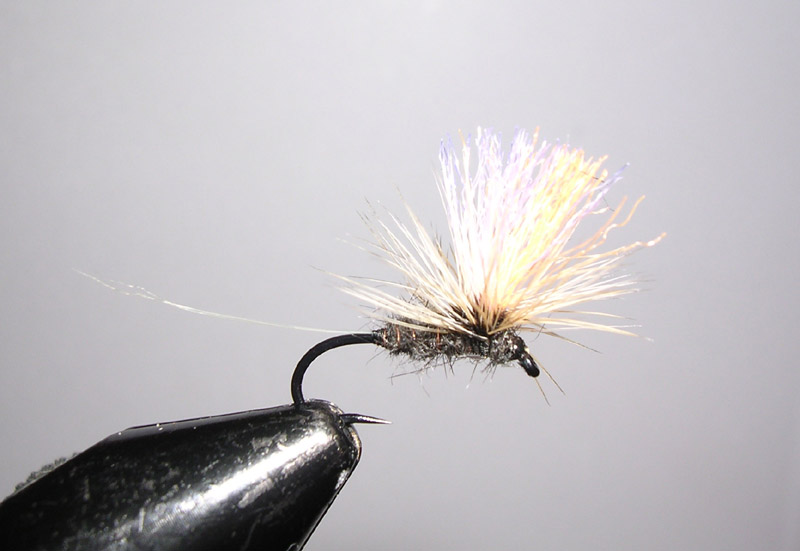 This is a very good fly all season but is particularly good in the very small sizes on some of the slower stretches of the river. It is a great imitation of hatching midge and of the reed smuts that the trout can become preoccupied with during a summers day. 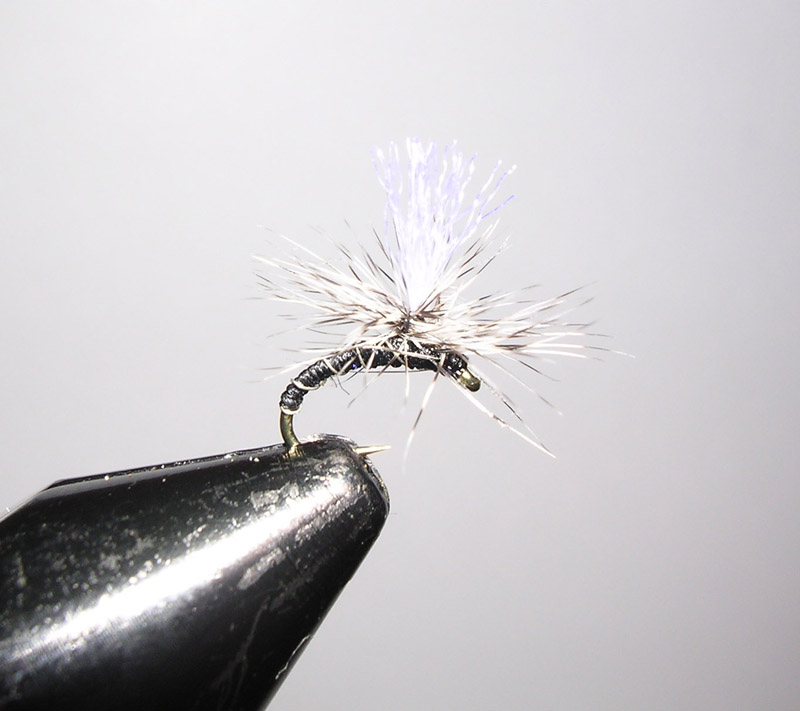 This is a great little fly when a rise is on as it looks like a hatching bug of any description. A great dry fly banker which works all year. With or without a tail is up to you but I like the fly to have a wee shuck. 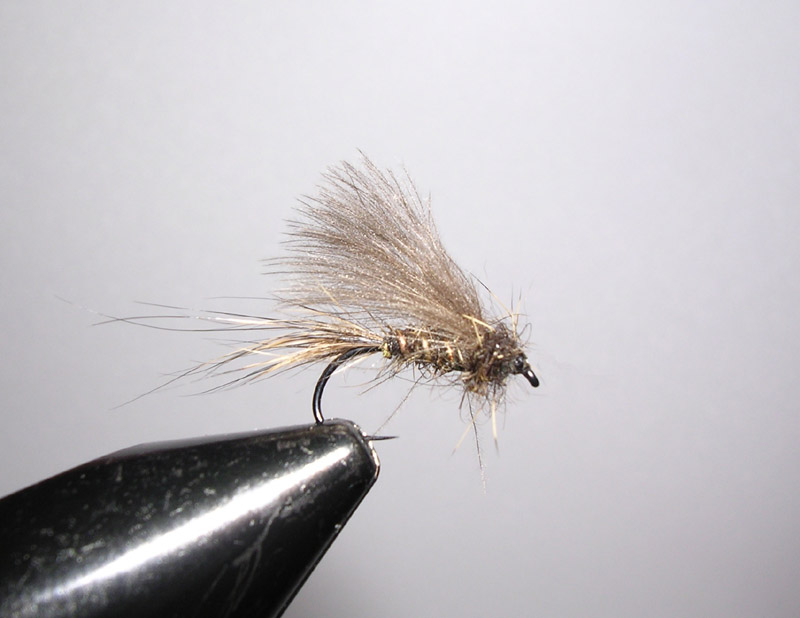 This is a vital fly to carry on summer evenings, especially just as dusk is falling. The trout really do key into these flies for a small period of time and nothing else will work. A sherry spinner or orange quill is also suitable, but I find this CDC pattern the most effective as it sits in the surface film. Just like the real fly.

Body: A rusty red CDC feather tied in at the tip, twisted into a rope and then wound on

Hackle: A dirty white natural CDC feather spun in a dubbing loop, which should be fairly sparse. 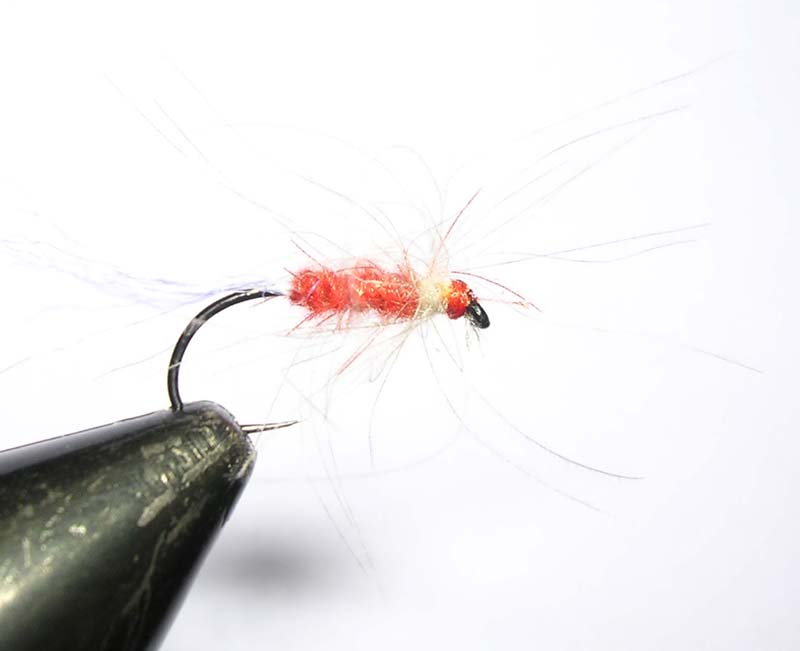 A dry fly yes, but more of a general attractor type. It may represent many of the winged insects skittering about the river surface but I fancy it for a sedge. As a wet fly it is also pretty good.

Hackle: Red game palmered, Another for the collar 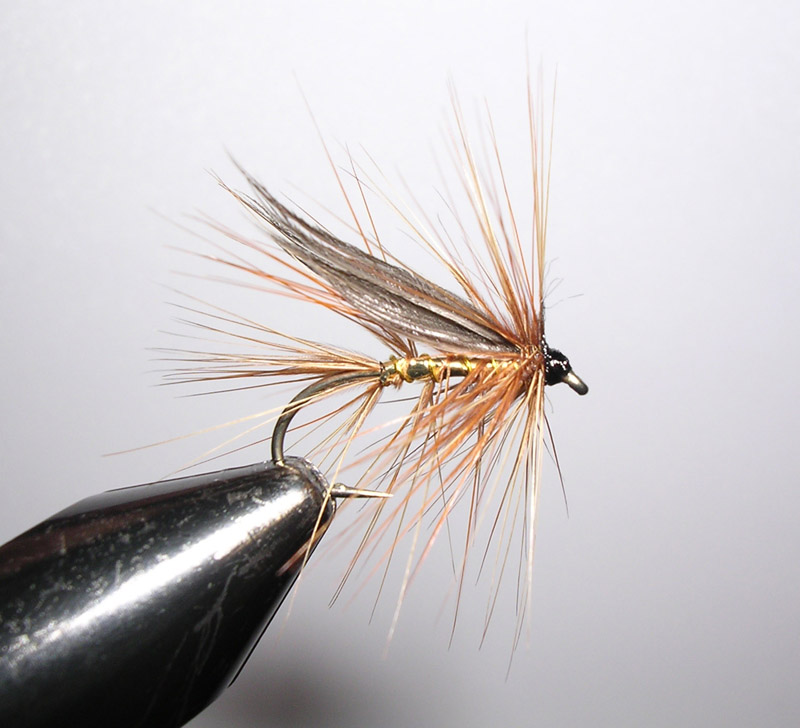 This is perhaps the best fly of all and it can be used confidently all season in many sizes. It represents almost anything and the trout love it.

Hackle: Starling back feather wound with silk through the first 1/3 of the fly 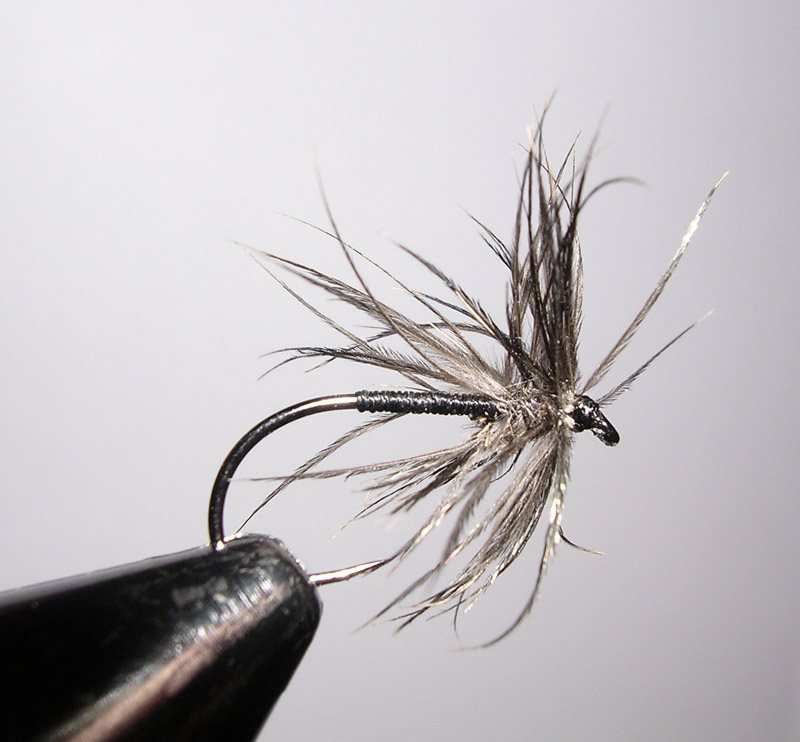 A devastatingly effective fly for Don trout and one most locals never have off their leader. Good as a dry and a wet, but best fished spider style.

Body: Thread as above

Wing: Rolled blackbird wing or similar, tied up at an angle as shown 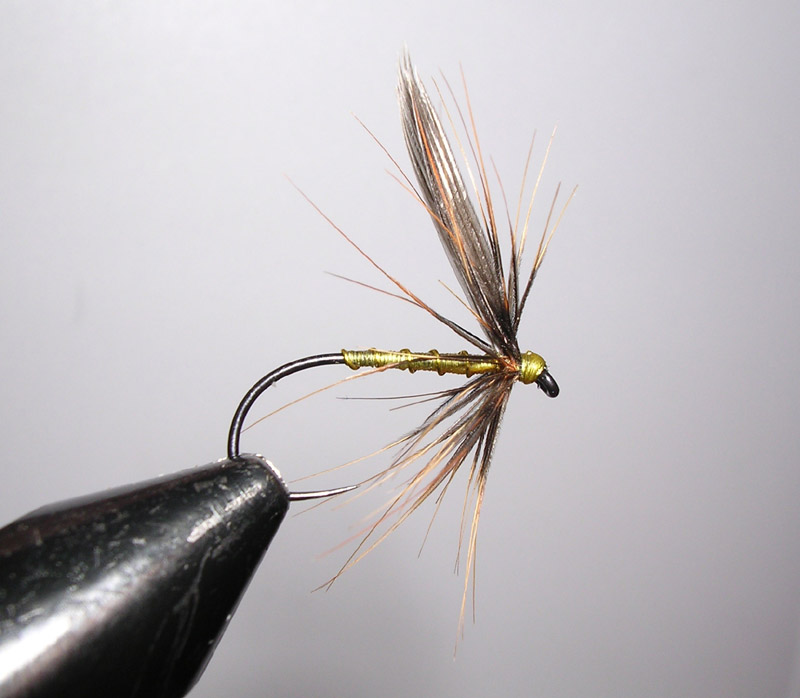 ( Hares Ear Soft Hackle ) Many versions of this are popular. Tied with hackles of plover, partridge, woodcock and grouse. The Plover one is perhaps the most effective all rounder, but the others can have their days too. 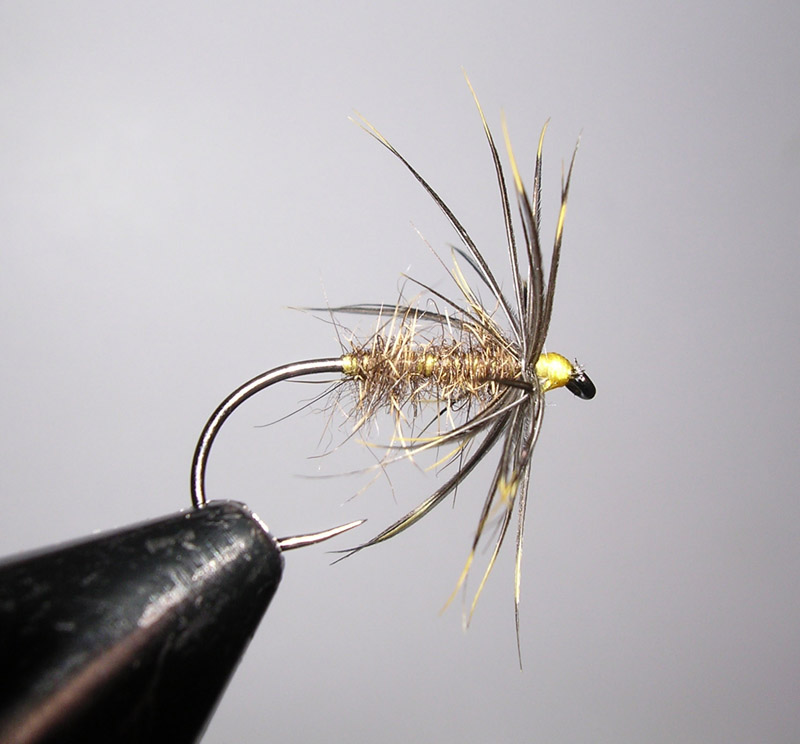 A good dark olive and iron blue imitation, this is yet another spider that fishes well most of the season. Especially on the top dropper. 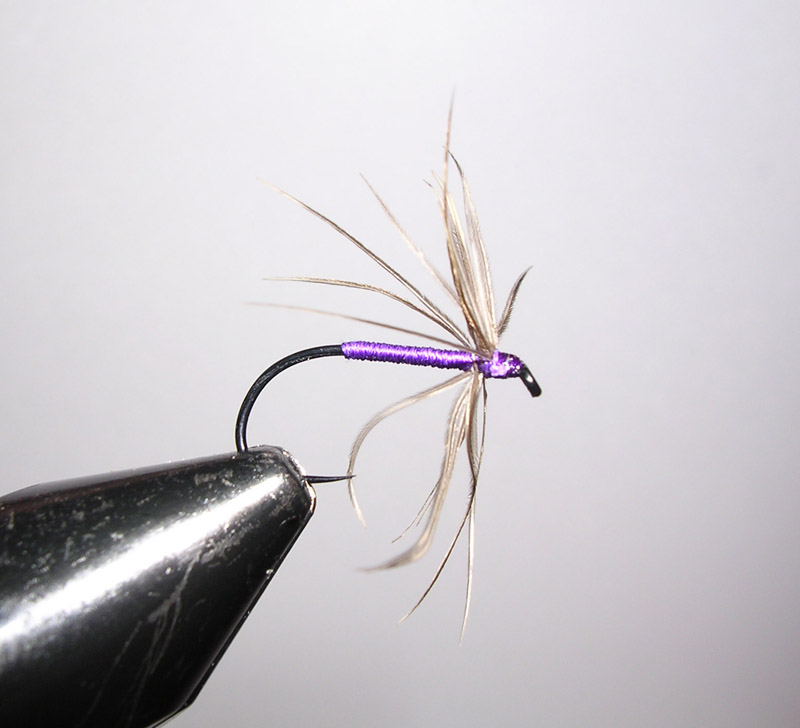 A borders fly that works very well mid season for trout on the river. The original used Landrail for the hackle. A few substitutes are available but I have found the lightly barred rusty red feather from the lesser coverts of a blue jay wing are an excellent alternative.

Body: Silk as above 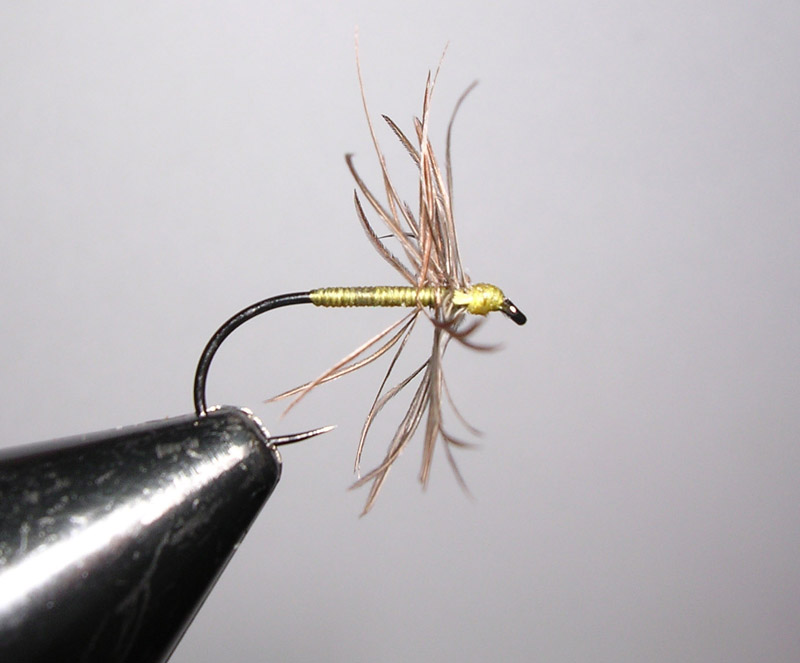 Hackle: The pale grey from the inside of a moorhens wing 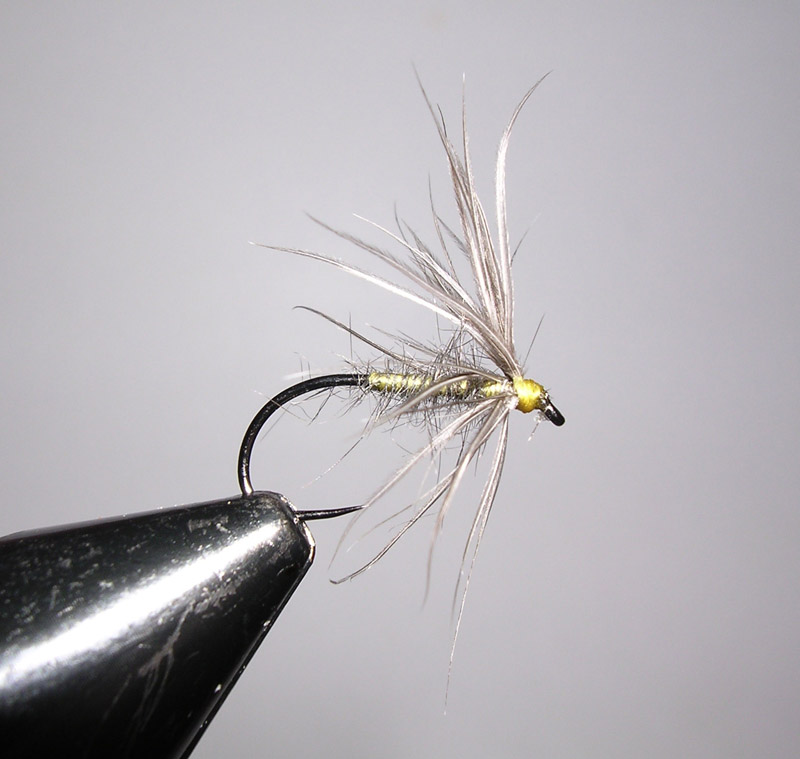 The Don is full of black buzzers and the trout feed on them voraciously. If there are no upwings or sedges about, or even if there are, the rising trout are often taking buzzers. Try in the slower sections of river. A size 12/14 duckfly can do some damage during the summer. Not sure why though. 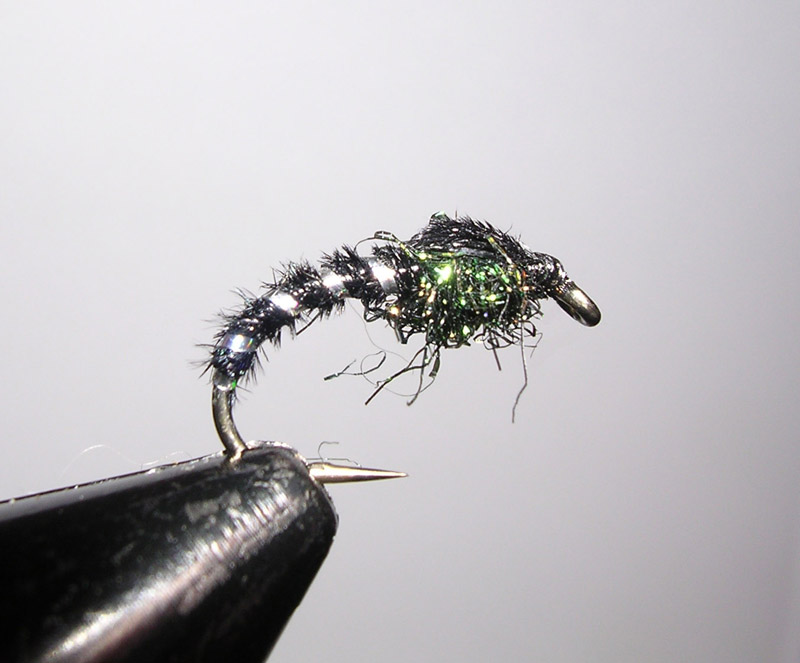 This is a great all round general nymph pattern. Use weighted and unweighted versions and prospect with it. 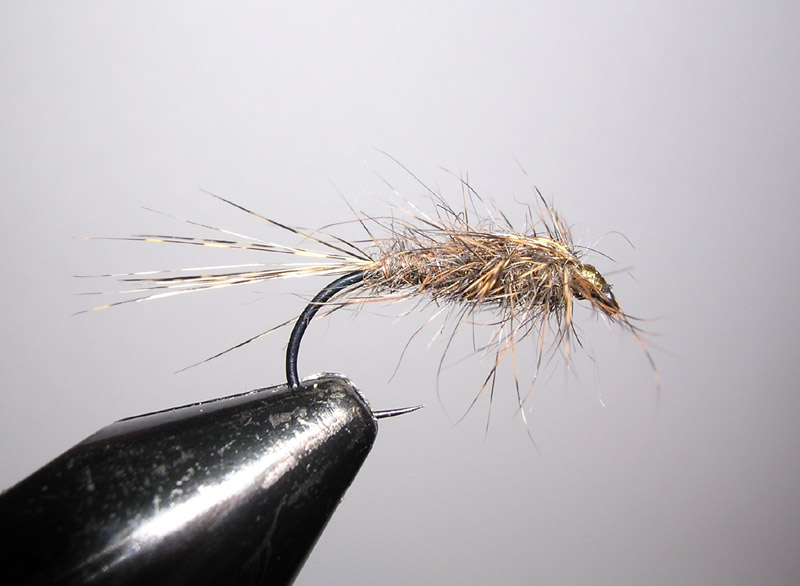 Another good all rounder, but especially effective as a baetis nymph ( small and blue winged olives and iron blues ) Again try weighted and unweighted ones.

Thorax: Hares ear well picked out, or you can form legs with the tips of the pheasant tail. 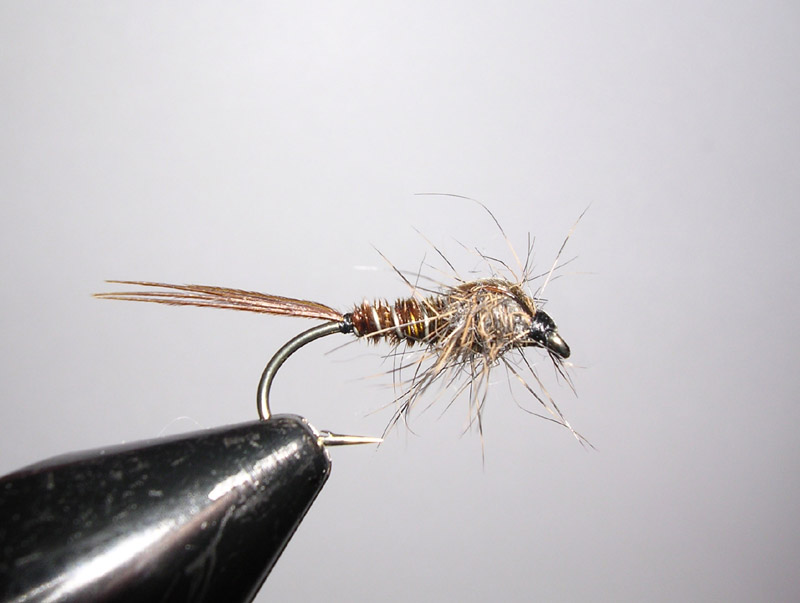 This a good early season fly when fished czech style. It can also be tied without the bead and smaller with a tungsten head to represent different nymphs. But the large copper one is great as a caddis fly nymph/ stonefly imitation in fast water. 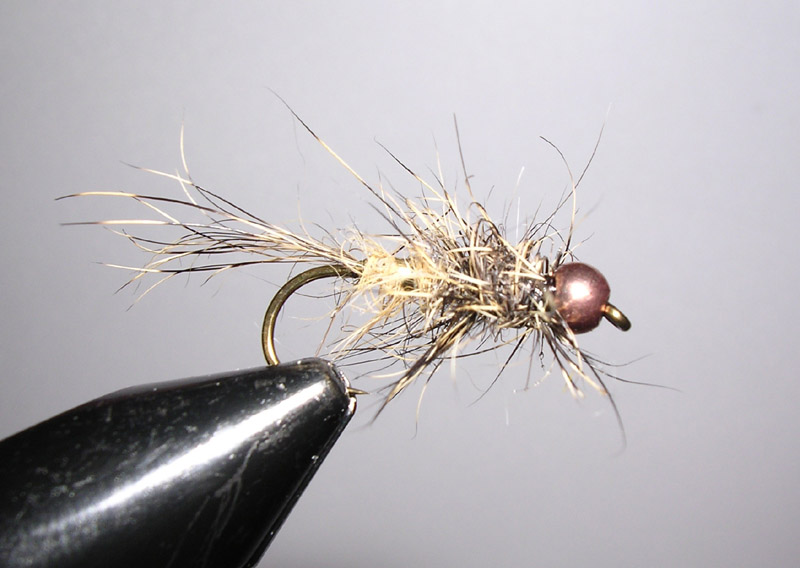 The Don has an abundance of freshwater shrimp and they tend to be a dull straw/light olive colour. It is an effective pattern to fish czech style. 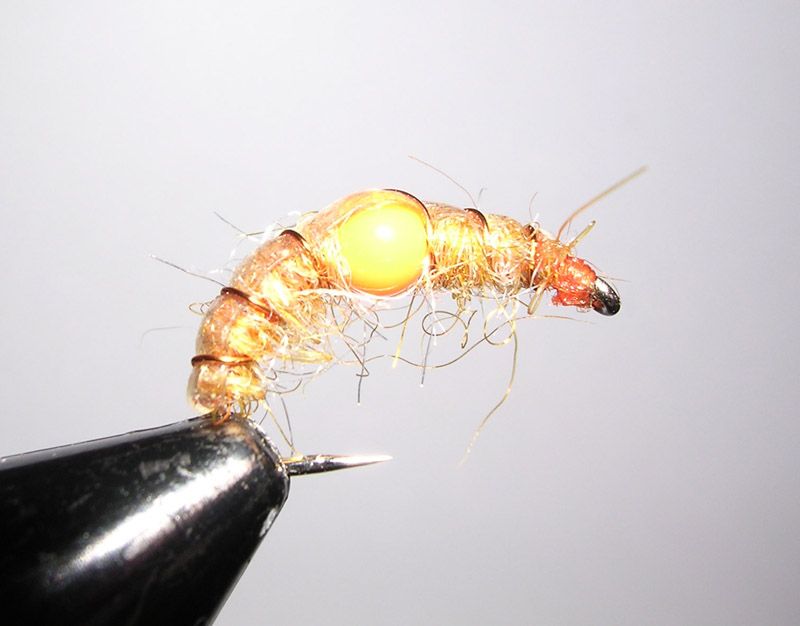 This is an effective fly on the Don when worked through some of the Pocket water areas. There is an abundance of Hydropsyche and ryhacophilia nymphs, so take green and cream/tan versions.

Optional: Pheasant tail legs ( as seen on the green one ) 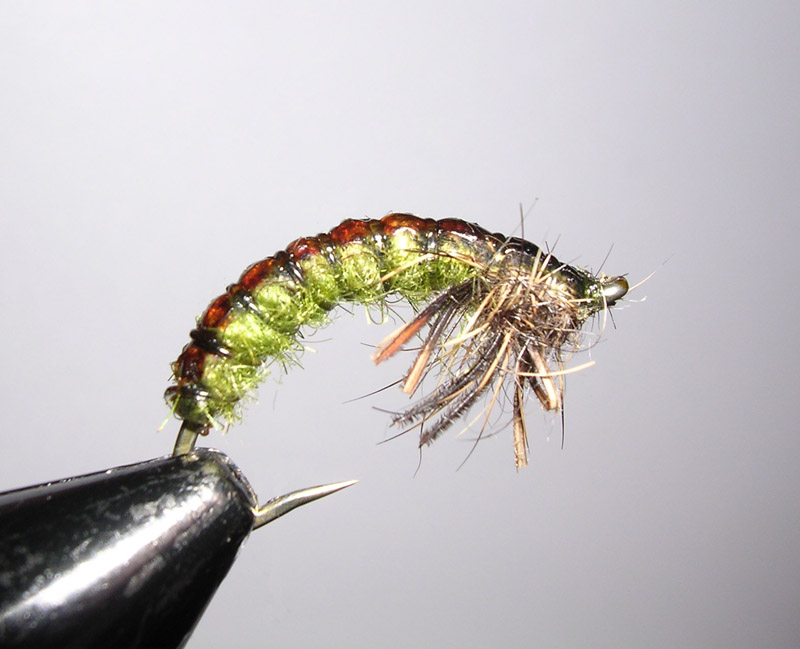 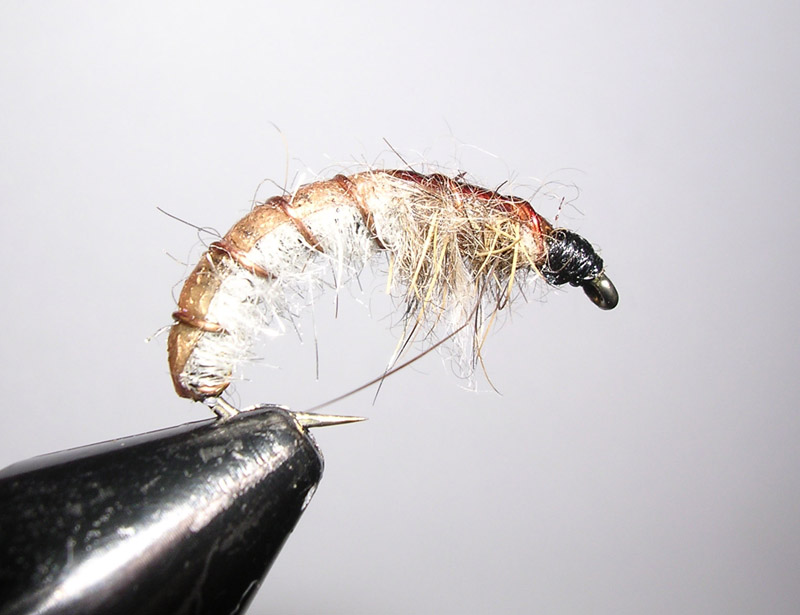 I hope you find this fly selection useful and informative.